For a long time, researches in entrepreneurship have studied the characteristics that differentiate entrepreneurs from managers (Fisher, 2012) and Sarasvathy’s effectuation theory (2001) has drawn a lot of attention recently. This concept is consistent with the idea of emergent strategies (Chandler, DeTienne, McKelvie and Mumford, 2009). It is to be contrasted with causation that considers that calculations and statistical inference can predict the distribution of outcomes (Sarasvathy, 2001) and is therefore in line with the idea of deliberate strategy formation.

Managers tend to follow a causal reasoning approach: they make plans to reach a
pre-determined goal. To do so, they select the appropriate means in their control or build new means that will enable them to reach their objective (Sarasvathy, 2008).

Entrepeneurs, on the other hand, usually think more effectually, focusing on their actual means and gradually converging towards an opportunity through execution. Instead of considering the unexpected events that differ from what was planned as the exception, entrepreneurs rather see them as the norm (Sarasvathy, 2001). 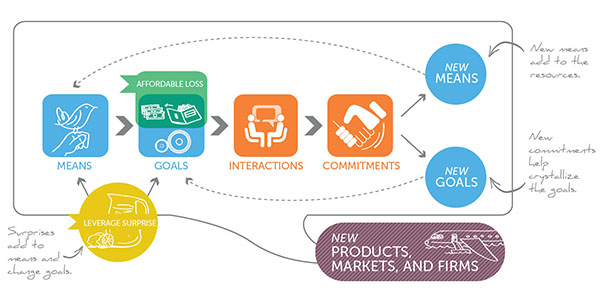 Sarasvathy, S. D. (2001). Causation and Effectuation: Toward a Theoretical Shift from Economic Inevitability to Entrepreneurial Contingency. The Academy of Management Review, 26(No. 2 (Apr., 2001)), 243-263.